The mainstream and social media captured the violent unrest that occurred in Beetham Gardens in Port of Spain in multi-racial Trinidad and Tobago on Thursday November 23, 2017.

Beetham residents created a gridlock on the highway leading to and out of the capital city. During the blockage, they rained stones at cars, vans, trucks and buses which shattered windows and windscreens. They robbed and terrorised innocent persons who were trapped in the roadblock. Gasoline was thrown on cars to set them alight with people inside.

Former Minister of National Security Jack Warner said: “Imagine a group of young black boys are holding Port of Spain and this nation to ransom. A black nation with a black Prime Minister, a black National Security Minister, a black Police Commissioner and a black Chief Justice. They are making our leaders look impotent and is about time something is done” (Newsday. Nov 28, 2017).

These threats and violence are not new in Beetham. On September 9, 2017, police officers from the Port of Spain Inter Agency Task Force (IATF) came under attack in Beetham Gardens after they attempted to arrest one of three men whom they said opened fire on them as they were patrolling the area (Express. Sep 10, 2017). There were also violent confrontations in 2011 and 2013.

Their complaints have been the same over the decades: “That is why we have to block-up the roads because when people start to feel it in traffic, then they [Government Ministers] will finally come down to speak to us and hear our grievances.”

“Beetham grievances” are listed as police brutality, poor drainage, unemployment, lack of contracts and neglect by ruling politicians. To express their grievances, they effectively use their strategic location to cut off the flow of traffic on the Beetham Highway, the Eastern Main Road and the Priority Bus Route. They block the road with debris, light fires, rob commuters and damage vehicles. Over the past decades, hundreds of innocent people have fallen victims to Beetham’s fury.

Even on normal days, commuters are robbed on the Beetham. Drivers cannot stop even in an emergency. The area has become a hotspot with armed gangs. To date, no arrests have been made on the perpetrators who strike fear in the hearts of commuters. The reign of lawlessness and terror continues every year.

Beetham is a creation of the ruling People’s National Movement (PNM) under Dr Eric Williams. It was a refuge for illegal immigrants from St. Vincent and Grenada who salvaged a living by scouring waste materials in the garbage dump. In the 1970s, the PNM Government converted part of the dump into a safe voting bank by building free houses for the squatters with State revenue. The name “La Basse” was changed to “Beetham Gardens.”

Over the decades, the PNM, NAR, UNC and PP governments built pre-schools, primary schools, high schools, technical-vocational institutions, playing fields and community centres. Politicians of every hue try to placate the black youths by befriending them with awards of contracts, gifts and privileges. But black rage continues despite political patronage. Black identity is very strong in Beetham, and very often, grievances are expressed in the language of “black victimhood” and “black oppression.”

Mitchell even accused the Indian-led People’s Partnership government (2010-2015) of paying a “coward tax” with programs like “Life Sport,” “Hoop for Life” and “Colour Me Orange” as “payment to the criminal element to keep a false sense of peace in East Port of Spain” (Guardian. Nov 25, 2017).

Moonilal accused the ruling PNM of having no plan for Beetham by not “engaging them in sports, culture and housing… the protest showed people feel alienated.” Beetham residents have always been strong supporters of the PNM. The now-silent Fitzgerald Hinds is their current PNM representative in Parliament.

Indian politicians cannot protect their representatives. They are interested mainly in Indian votes, not much in their safety and welfare. When black thuggery and terrorism were directed against Whites and Indians during the Black Power rebellion in 1970, Indians turned to politician Bhadase Sagan Maraj. He stood up against the anarchists and the Indian community stood behind him. The leaders of the Black Power uprising had marched to the Beetham dump to highlight the plight of their black brothers.

The current crop of Indian politicians are not really speaking on the behalf of their constituencies. Given another chance in government, they would continue their coward practice of black appeasement. This has been the nature of ethnic politics in Trinidad, Guyana and Suriname.

The writer, Kamal Persad (BA, MA, History, UWI), is a historian and Indian civil rights activist. The views expressed in this article are solely those of the writer and do not necessarily represent the views of the THE WEST INDIAN.

Hard Times Did not Suck the Sweetness out of Sugar: Better Times will Make it Sweeter

India and Caricom During Covid 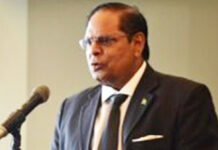