David Granger’s declaration a few weeks ago that he “has been in the struggle since he was 16 years,” is a little known story, but one that has reverberated with curiosity and perplexity. Many Guyanese and even the local political pundit, Freddie Kissoon (FK) appeared to be stunned by this announcement.

This was an attempt by Granger to establish his credibility among PNC members and supporters. But how many people believe Granger’s new revelation concerning his 52 years’ service as a PNC member is hard to determine. Also, this claim means that his PNC membership spanned his entire army career. A major dilemma for Granger is how to bridge the ‘credibility gap’ that his coalition government has allowed to widen since occupying the seat of government in May 2015. Granger and his coalition have been blasted by opposition and civil society forces for spewing so many lies that their path towards governance of the country is murky and riddled with hurdles.

FK mentions about having met a PNCite Clarissa Reihl who said that she never saw Granger “around the activities of the PNC.” FK also reported that a senior PNC member told him that Granger was “nowhere around when the PNC was struggling.” FK suggests that Granger might have been working “behind the scenes.” I therefore ask: “and whose bidding was he doing?”

The popular view is that Granger got into active politics only in 2010. At the PNC biennial congress in 2009, for example, when four PNC members (Winston Murray, Aubrey Norton, Aubrey Armstrong, and Richard Van West Charles), challenged Robert Corbin for the leadership of the PNC party, Granger’s name was not among that list. It he was active or perceived to be active in any leadership role, his name would have probably been on that list too!

FK ends his analysis by saying that he remains curious about Granger’s statement: “I’m no stranger to struggle.” I believe that FK was onto something when he suggests that Granger might have been working “behind the scenes.” I will elucidate this position by drawing upon several events in which Granger might have indeed been working “behind the scenes.” And these are significant events that have changed the course of Guyana’s history.

While Granger was in the leadership of the Guyana Defense Force (GDF), he was elevated to the rank of “Education Officer.” His primary political role was to ensure the army’s loyalty to the Maximum Leader. As part of this process, Granger and others had to instill the PNC’s ideology (of party paramountcy, cooperative socialism, state ownership, consolidation and retention of power, dominance and control, mass mobilization and cohesion, and militarization) into the minds of the army personnel. Some people would liken that process onto a form of indoctrination.

LFS Burnham knew that he was running a minority government that had ‘rigged the electoral system’ on its way to power. He felt it necessary therefore to prop up his rule by building a strong, but loyal army. He had a convenient rationale then: the threat by Venezuela to annex 5/8 of Guyana’s territory! The man who was responsible for this ideological training and transformation was David Granger. That was a critical piece of political work designed to consolidate and keep Burnham and the PNC in power.
Securing the army’s loyalty was one thing, but securing the support of the Guyanese people for Burnham’s grand political design was a different matter. Burnham needed operatives to subvert the electoral process, including rigging. Was Granger one of the persons identified to ‘deliver the goods’ for the Maximum Leader? The pendulum seems to swing in that direction.

Let’s turn to the 1973 general elections to ascertain Granger’s role, if any, when Bholanauth Parmanand and Jagan Ramessar were gunned down by members of the Guyana Defense Force at the polling station at No. 63 Village Corentyne. On the evening of July 16 1973 “members of the GDF stormed into the polling place and attempted to cart away ballot boxes to an undisclosed location,” says Hydar Ally. “Scores of people, the vast majority of who were known supporters of the PPP, had gathered in front of the polling station to protest against the removal of the ballot boxes by the military.”

PPP supporters believe that Granger had knowledge of these murders since they know that he was a senior army officer, as well as, by the fact that ballot boxes were seized and taken to the army headquarters, where his office was located. “He must have known about padded, fake, and missing ballot boxes.” The US Embassy cable confirms that “ballot boxes were delivered by a variety of means to the GDF headquarters and remained there for up to 10 hours before these were sent to the 3 Counting Centers to be counted.” Furthermore, the cable supports the claims made by the PPP that there were “stuffing and switching while the boxes were at the GDF.” A senior PPP member states: “How could he (Granger) be in a senior position in the army and having the ears of the President, and not know about the ballot box shooting and the padded or exchanged ballot boxes?” Was this activity a “behind the scenes” work of Granger?

What about the loan of 237 weapons to external agencies, like paramilitary forces and the Ministry of National Development in the late 1970s, of which only 82 (or just about 1/3) were returned? These weaponry included sub machine guns (AK47), M-70 rifles, and grenade launchers. When there was a shootout between the police and criminals at Mahaica, East Coast Demerara, in 2009 the sub machine guns (AK47) that were seized from the criminals had been issued by the army to the PNC. According to senior army officer Sydney James, 44 sub machine guns that were issued to the PNC’s Ministry of National Development are still missing. How many of these lethal weapons are in the hands of criminals?

Did Granger know about this conspiracy? Why would an Education Officer and later a senior military man, who was promoted Commander of the army in 1979, (probably a reward for his “behind the scenes” work in the 1973 general elections and the 1978 referendum!) not be aware that the army had loaned the PNC these guns? Such a transaction requires the authorization of the Defense Board of which Granger was a member. It’s hard to think that Granger was not part of that decision making process! What’s intriguing though is this: “why would the army loan the PNC high powered guns?” For hunting? Was this another “behind the scenes” operation?

Did Granger work closely or had he knowledge of the operations of Rabbi Washington and the House Israel (HOI) thugs? Who, within the army, was feeding the Rabbi machinery with intelligence? Was the same person passing intelligence to the X13 anarchists? The COI referred to an “Account Form” which supposedly logged arms transferred from the army to the “House of Israel” death squad through the PNC. The paper trial on this is missing.

According to Rakesh R, “the WPA in a statement in February 1980, using government documents, alleged that arms flowed from the Guyana Defense Force to Rabbi’s organization.” Did Granger embrace, as Hoyte did, the so-called ‘freedom fighters’ who led an insurgency against the PPP government? Were these operations linked in any way to the X13 plan? Why did Granger oppose the use of the army to control the uprising at Buxton in the 2000s? Was Granger’s approach a part of his “behind the scenes” political activism?
Why did Granger refuse to testify before the Rodney COI? There is the belief that he should know about Rodney’s assassination. Apart from being a member of the Central Intelligence Committee, he was also the Commander of the Army then, and it was one of his staff, Gregory Smith, that was linked to Dr Walter Rodney’s assassination. Who allowed Gregory Smith’s file to disappear from the GDF headquarters? Could those operations qualify as “political work behind the scenes?”

Serving in several top and strategic positions and not having either knowledge of these major historical events or any direct involvement, are hard to digest. And if these events are not the significant “behind the scenes” work that span the 52 years of Granger’s political life, then to what other “behind the scenes” political activities could he be referring?

DR. TARA SINGH IS AN INDEPENDENT COLUMNIST. The views expressed in this column are solely those of the writer and do not necessarily represent the views of the THE WEST INDIAN. 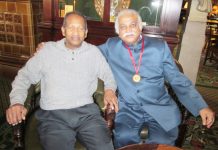 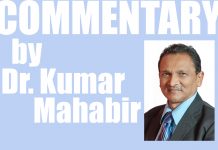 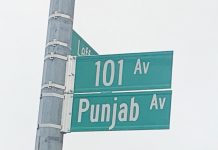 Court Grants Bail to Young Mother Over Drowning Death of her...

Businesswoman on More Than 100 Fraud Charges Escape From Prison

150 Years After the 14th and 15th Amendments, Jim Crow Discriminatory...

The Confluence Of Great Minds