Defend Decision to Close Down the Century Old Enterprise

PORT OF SPAIN, Trinidad (CMC) – The Trinidad and Tobago government says it will
give the first option to the Oilfield Workers Trade Union (OWTU) to acquire the refining
assets of the state-owned oil company, PETROTRIN, as it defended the decision to
close down the century old loss-making enterprise.

Prime Minister Dr. Keith Rowley in a radio and television broadcast on Sunday night
said that his administration had decided to accept the recommendations of the board of
directors of the company to shut down the oil refinery operations resulting in the loss of
hundreds of jobs.

“The decision to close the refinery was taken after detailed analysis and deep
introspection. This is not a decision that was made lightly or easily. Options were
explored and reviewed. We sent the board back on a number of occasions to consider
different scenarios and possibilities. At every step the effect on workers and their
families and the communities that rely on refinery operations was considered,” Rowley
said.

But he told the nation that his government was prepared to give the OWTU, the
representing workers’ union “the first option to own and operate” the refining assets of
the company, “on the most favourable terms”.

Rowley said it is the intention of the government to put the assets “in a separate
company for opportunity attention”.

OWTU and other trade unions have been gearing for a shutdown of the country on
Friday following the announcement by PETROTRIN last week that it was shutting down
the refinery. OWTU said it had in the past presented alternative proposals to the
company in a bid to make it viable.

In his address, Rowley said his administration is “acutely aware of the traumatic effect”
of the decision to close down the refinery on the entire country, particularly the workers,
their families and surrounding communities.

“In order to minimise the overall negative effects of this inevitable decision to get out of
refining the government will ensure that the workers who are surplus to the requirement
of the renewed effort leave the company with an attractive separation package that
should be well received and backed up by the assured pension payments to come.
The wider population in these fence-line communities will benefit from some deliberate
additional Government expenditure on infrastructure and social support.”

He insisted that closure was inevitable given the billions of dollars the company had
been losing over the years.

“The difficult fact is that we had no choice. To have left the company as it was would
have only made the situation worse. The decision would have been taken out of our
hands and we would not have been in a position to cushion the effect of the changes.

“By moving to fix the company now, we are in a position to treat employees with care
and concern by softening the effects of the required adjustments. The company will
treat every employee with dignity and provide services such as financial advice and
employee assistance programmes for psychological support,” he said, adding that
“workers are expected to receive significant financial packages upon ties being severed
with the company”.

Rowley said that approximately 1,700 permanent workers will be affected in the refining
and marketing division of the company, while in exploration and production,
employment levels are to be reduced from 1700 workers to approximately 800 persons.

“A large number of these workers, those over 50, may be able to exit by way of
attractive early retirement packages,” he said, adding that in the coming weeks the
government will take part in the announcement and participation in at least two
significant industrial projects in the southwestern peninsula.

“Increased drilling and production works, both on land and offshore, are to be expected
in the new business model. There will be increased use of service contractors and
suppliers and this should cushion the effects of loss of some opportunities at the
refinery.”

In his address, Rowley recalled that in January 2017, he had warned the nation about
the financial situation existing at PETROTRIN and the need to deal with the situation.

“I reminded you that there is a US$850 million bond that is coming due for payment in
the form of a single payment in August 2019 and another of almost US$700 million that
would be due soon after,” Rowley said, adding that the future of the company “has
been the subject of much negative speculation for the past several months but
inevitably we must come to the time of decision making as we are forced to abandon
the procrastination and finger pointing which have only served to worsen the eventual
outcome”.

He said while he appreciated the importance of the oil and gas sector to the well-being
of Trinidad and Tobago and that is why two of the first actions taken by his
administration soon after coming to office in September 2015 were to appoint the
Standing Committee of Energy, the sub-committee of Cabinet charged with the
responsibility of deciding and directing policy in the oil and gas industry. A decision was
also taken to appoint the boards of directors of both PETROTRIN and the National Gas
Company of Trinidad and Tobago Limited (NGC).

Rowley said that the changes announced last week regarding PETROTRIN are
expected to stop the taxpayers funding operations that are losing billions of dollars and
to stop the haemorrhaging of much valued, and much demanded, foreign exchange, US
dollars.

“The primary objective of the announced interventions is to transform the business of
the company from chronic money losing to a return to profitability. To some, these
changes may appear drastic, but the situation at PETROTRIN requires drastic action.

“It requires intervention now, in fact before now, but the country’s decision makers,
whilst knowing the problem, shied away from the negative responses that were certain
to accompany any corrective action. In short, the PETROTRIN fix was always seen to
be bad for politics and even one’s political survival but we have arrived at a place now
where its ongoing failure threatens the national survival. Such is my lot.”

Rowley, in his 50 minute address, said that he had taken an oath to act “without fear or
favour, without malice or ill will” to any person or group of persons and that his “does
not have the luxury of not attending to this age old problem. Time is not on our side.

“To those whose knee jerk reaction to this very real crisis is to threaten chaos, to burn
down the country, to spew invectives, to demonize and toss insults, none of this assists
in addressing the issue in any meaningful way,” he said, reminding the country that it
was a People’s National Movement (PNM) administration that had taken the decision to
have an oil refinery operational here when in 1985 it bought the Texaco refinery at a
time when other refineries were shutting down and the US owners were intended on
following suit.

He recalled a New York Times article in 1985 that said the government then had agreed
to buy the money-losing refinery mainly to save more than 3000 jobs.

Rowley said that with a refining capacity of 140,000 barrels per day (bpd) the local
production available for refining is 40,000 barrels.

“We really depend mostly on a daily importation of 100,000 bpd which we refine at a
significant and constant loss. With the help of in-depth analyses by local and foreign
expertise we have looked at a number of operational business models for the refinery
operations and they all indicate that the refinery is and will continue to be an increasing
money loser.

“In fact the analyses show that the rest of the company, Exploration and Production, if
operated properly and separated from the refinery it could be a good business which
could produce handsome dividends to the shareholder, the taxpayers of Trinidad and
Tobago. It is this advice that has finally been accepted by the Cabinet after about a
year of intensive work. “

Rowley said that PETROTRIN, which was entrusted with the country’s proven oil
reserves has failed to fully deliver on the country’s expectations.

“There have been many instances and/or arrangements which can only be described
as gross mismanagement of the national patrimony. Every project within the past few
decades has been subject to massive cost overruns and lengthy delays,” he said listing
a number of projects that had been completed over the years at significant costs to the
taxpayers.

“The latest of these projects the Ultra-Low Sulphur Diesel Project was estimated to cost
US$113 million and to date PETROTRIN has expended US$413 million. Whilst the
project is 98 per cent mechanically completed it cannot be operated because the
structural specifications were not adhered to, meaning the foundation is faulty and
cannot be used and what is worse no one nor any entity has been held accountable for
this expensive travesty.

“The cost to rectify this omission is estimated at US$350 million, money which we do
not have and cannot easily borrow,” Rowley said, adding that “unfortunately, the
nightmare does not end with these disastrous projects, the company now borders on
insolvency as its cost of operations far exceeds its revenue”.

He said survival has only been possible through the non-payment of taxes and royalties
owing to the Government as well as the procuring of Government guarantees for loans
from financial institutions.

He said in 2016, the management of PETROTRIN provided an update on the
company’s operations and its financial situation, adding “the presentation was not re-
assuring”.

He said the report noted that the company had a severe cash flow problem, estimated
at billions of dollars and as much as seven billion dollars was estimated for the required
upgrade and maintenance work for plant, equipment and installations.

In addition, oil production averaged 45,000 barrels per day “and to this day continues
decline.

Rowley said the report also noted that the company was “heavily overstaffed and there
were deficiencies in technical competencies in key disciplines.

“Manpower costs then accounted for about 47 per cent of recurrent expenditure and
the company was exploring a reduction in staffing”.

He said the financial forecast noted that the company would suffer a loss of TT$648
million in 2016 and return to profit of TT$635 million by 2020.

NYC March For Our Lives

Man Gets 70 Years in Jail for Wedding House Murder

The Relevance Of Mahatma Gandhi Today 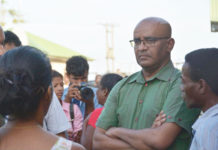 Guyana Opposition Leader Says Piracy Should be Treated as Terrorism

No JSC For 10 Months: As the Unconstitutionalities Continue