GEORGETOWN, GUYANA — A 59-year-old woman was sentenced to four years in jail on Thursday after she pleaded guilty to the possession of five pounds of cocaine, which she was attempting to smuggle out of Guyana to New York.

Kristina Rampersaud was also fined $6.5 million when she appeared before Chief Magistrate Ann McLennan in Georgetown.

The police say on September 15, 2017, she had 2.318 kilograms (equivalent to five pounds) of cocaine in her possession at the Cheddi Jagan International Airport (CJIA).

According to a report in the Stabroek News, Customs Anti-Narcotic Unit (CANU) Prosecutor Konyo Sandiford told the court that on September 15, Rampersaud was an outgoing passenger on a Caribbean Airlines flight BW526 bound for JFK, New York.

She noted that Rampersaud had already checked in and proceeded to place her suitcase on the scanner when a CANU officer observed a suspicious image on the monitor.

The officer then requested to look at Rampersaud’s travel document and then removed the suitcase from the scanner to examine the luggage. A probe of the rear of the suitcase uncovered a white substance, which was suspected to be cocaine.
Rampersaud was immediately arrested and cautioned by CANU officers, whom she told that she was given the suitcase by a man to deliver at JFK.

Sandiford told the court that investigations are being carried out in relation to the supplier, the Stabroek News reported.

The newspaper reported that Rampersaud, who resides in Suriname, told the court that while traveling back to Guyana to look after her pension, she met a young woman in the bus from Suriname. She claimed that the young woman told her of “a fast way to make money.”

Rampersaud further told the court that curiosity led her to call the number given to her and she got on to a man, who told her he was going to send her to New York. She was instructed to meet with him at Giftland Mall, which she did.
She added that the man told her to stay at a hotel instead of at her sister’s residence, where she was planning to stay. She said she was given a suitcase, which two young men were to collect at JFK.

Cultural Values Vital to Evolution of ‘One Guyana’

Caribbean Airlines CEO Promises no Drop in Quality of Service Despite Revenue...

Sugar Workers to Get 50 Percent Severance by End of January

Government and Union at Odds Over Future of PETROTRIN

Small Contractors to Get 20 Percent of all Government Contracts: Harmon... 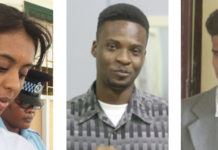