PORT OF SPAIN, Trinidad, CMC – The number of confirmed cases of COVID-19, in the twin island republic has now risen to 50.

The Ministry issued an update to a statement on Sunday morning in which the tally of positive cases had increased to 50.

The Ministry stated that all positive cases to date are imported, meaning they originated outside of the country.

To date, 298 people had so far been tested for the virus and of this number – all 50 cases were imported.

The news emerged a day after it was revealed that 40 passengers from an ill-fated Caribbean cruise had tested positive days after returning home from Guadeloupe.

On Saturday, Health Minister announced that 40 of the group of 68 nationals who returned home last Wednesday from Guadeloupe had tested positive for the virus at the quarantine facility.

The 40 new cases were among 70 nationals who were on board the cruiseliner Costa Favalosa, which was denied entry to Martinique after leaving Guadeloupe when several passengers aboard tested positive for the virus.

Two women who were also among the travellers from Trinidad and Tobago on the cruise, returned the day before the batch of 68 and tested positive for the virus on their way home and were immediately hospitalised.

However, as a result of this batch of positive tests, Chief Medical Officer Dr Roshan Parasram advised that the remaining 20 quarantined nationals will now face more monitoring and will have to restart a new 14-day quarantine period

The ministry has again advised the public to take all the necessary safety precautions to protect themselves from the virus.

Whitewash for Windies on Anniversary of World Cup Win

Community Rallies in Support of DACA

Though Gratifying, Food Hamper is a Temporary Measure 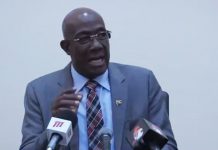 Prime Minister Rowley Says Election Will be Called When it is...