GEORGETOWN, GUYANA — Acting Police Commissioner, David Ramnaraine, on Monday justified the killing of three suspected bandits at the Georgetown seawall, in the light of some concerns raised that only two of the men were armed and only one gun was recovered.

The commissioner also warned that failure to swiftly apprehend the lone escaped suspect could result in an act of retribution.

Dextroy Cordis, 46, called “Dottie” of Lot 4 Grove Public Road, East Bank Demerara, Errol Adams, 57, called ‘Dynamite,’ of Dartmouth, Essequibo Coast and also of Buxton, East Coast Demerara, and Kwame Assanah, a former soldier, of Buxton, were shot and killed last Thursday after police said they opened fire on ranks who had interrupted them during the commission of a robbery.

Speaking to reporters on Monday, Ramnarine said, “The specific details can always be debated but at the end of the day the evidence is there that they were part of a criminal enterprise. So, whatever specific actions they might have played on the day in question…you cannot escape the point… it is inescapable, the fact is they were part and parcel of an arrangement to commit a criminal act with some serious consequences and I am happy that has been aborted.”

Seeking to dispel concerns by sections of the public that the trio was executed, the Police Commissioner argued that “no police officer sets out to execute a citizen” based on training and capacity building in recent years.

He pointed out that the police, who were part of last week’s operation, have “superior firearms training than the average policemen”.

Addressing concern about the shooting death of Assanah who never had any brushes with the law, the Police Commissioner said that did not mean that that man was not involved in criminal activity. “Did we plant him with the other two who met their demise? Did we put him there? No one has disputed that he was there,” he was reported as saying.

According to Demerara Waves online news, Ramnarine said the police did not use a decoy, but that the intended robbery victim was indeed a customer of Scotia Bank, Robb Street who had moments earlier left that financial institution. At the same time, he said the entire operation to intercept and capture the suspects, who had “intended to use deadly force,” was fortuitously shifted away from the busy Robb Street area to the Georgetown Seawall Public Road.

“I want to tell the citizens of this country, if the Guyana Police Force had not taken that course of action a few days ago and that would have happened there, a lot of collateral damage would have happened on Robb Street based on the information that we received and it is good that it ended up at the seawall at a more desolate location,” he was reported as saying, adding that it was not the first time that persons have left the bank, went to the seawall area and were robbed.

According to Demerara Waves, the Police Commissioner credited the operation to break up the bank-related robberies and carjackings to intensified surveillance, information, intelligence and public trust and support. “We have been able to put a dent to what was seemingly being referred to, regarded as by several persons out there as gang that was operating and was intended to create more havoc, more mayhem,” he was quoted as saying.

According the Stabroek News, Ramnarine said efforts are being made to apprehend the suspect who fled on a motorcycle, while noting that he is known to the police. “We have some information on him, we have a place and if we don’t get to him—from a law enforcement perspective, quite early—the information suggests that there may be an act of retribution,” he was quoted as saying.

In the coming days, the Commissioner disclosed, more operations are expected. According to Ramnarine, “sting operations are what you would call increasingly needed these days in law enforcement, so we will continue along that lane.”

He added, “Fortunately, for law enforcement, based on information, based on surveillance, based on intelligence gathering, based on public trust, based on public support, we have been able to put a dent to what was seemingly being referred to, regarded as a gang that was operating and was intending to create more havoc or mayhem in terms of robbery under arms where vehicles are hijacked and people are shot and so on.”

The families of the dead men previously told Stabroek News that they are not buying the police’s account of what occurred and vowed to leave no stone unturned as they seek answers.

“We are asking for a complete inquiry as to how and why he was killed,” Assanah’s wife, Claire Assanah had said. “He is not this person that they are saying. He has no criminal record, since we have been married, since we have been together. I have not bailed him out from any prison… or anything. He doesn’t have a criminal record. He doesn’t,” she was reported as saying. 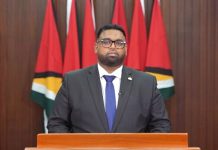