Organized entirely for community by community, the event took place in the heart of “Little Guyana” at the major transit intersection of Lefferts Boulevard in South Richmond Hill, a historically undercounted neighborhood.

As of September 30, New York’s self-response rate was 63.5%. Many communities in New York City, including immigrant-rich neighborhoods in Queens and Brooklyn, lag significantly behind. As of September 30, Richmond Hill and South Ozone Park have a self-response rate of between 51% and 52% of the 2020 Census. “Our thriving multicultural Caribbean immigrant communities are already under-resourced and underfunded, not just in Queens but throughout New York City. We are now at risk of losing half the essential federal funding for housing, healthcare, schools, public transportation, parks, and so much more,” said Mohamed Q. Amin, Founder of the Caribbean Equality Project. At the culturally-responsive rally, the organizers and speakers reassured community members that the 2020 Census is safe for everyone, regardless of your immigrant status or whether you live in illegal housing, such as a basement apartment. Nirmala Singh, one of the co-organizers and a founding board member of South Queens Women’s March, underscored: “Queens, we were undercounted 10 years ago and have seen the devastating impacts it has had on our communities.” She reminded powerfully that “our communities deserve better.”

Queens Gets Counted! was a borough-wide event held during NYC’s Census Week of Action. The Richmond Hill location was one of 30+ events that took place throughout Queens, the borough often referred to as “the crossroads of the world.” The event was organized in partnership with the Queens Museum, the U.S. Census Bureau, NYC Census 2020, the Office of Council Member Adrienne Adams, and six Indo-Caribbean and South Asian-led Southeast Queens community-based organizations, including Chhaya Community Development Corporation, DRUM – Desis Rising Up & Moving, Jahajee Sisters, Sadhana: Coalition of Progressive Hindus, United Madrassi Association, and Kaurageous Love. Together, over 20 staff and volunteers outreached to community members and counted over 300 households (approximately 900-1000 individuals).

Amin, a Caribbean LGBTQ rights advocate, added, “for the first time in history, the 2020 Census counts same-sex households. It is deeply unacceptable that the Census does not offer gender responses beyond the male and female binary. However, it is essential to note that the U.S. Census Bureau will accept forms in which the gender question is skipped. Hundreds of billions of dollars are on the line, including funds for many programs that directly support the LGBTQ+ community, including job programs, housing, education, senior centers, and HIV-prevention & treatment programs.”

Kohli, who spoke both in Punjabi and English, stated: “We do not have Sikhs as a separate ethnicity in the Census. We’ve been here for countless generations. We infiltrate every single sect of this country and we are still not seen in that way. Our representation is not there.” Jorawar spoke about what the Census means for women, and the need to ensure the sacrifices of Indo-Caribbean ancestors are honored. Ramjattan addressed the ways in which Census completion impacts local schools: “Why is it that my kids who live in the southend of South Jamaica have to go to Forest Hills to get better schools? We want better schools in our community.” Turning to her Hindu faith which centers oneness of all beings, Singh stated, “There is nothing more humanitarian we can do than filling out the Census.”

For the past five months, the Caribbean Equality Project and South Queens Women’s March have partnered to organize multiple pop-up food pantries in South Queens. From distributing culturally appropriate groceries and feminine hygiene products to providing cash assistance to documented and undocumented Caribbean LGBTQ+ immigrants, these two entirely volunteer-led organizations have been tirelessly responding to the food insecurity and financial crisis disproportionately impacting black and brown communities as a result of the coronavirus pandemic. To date, they have collectively fed over 5000 families, many of whom are low-income and working-class immigrant families. The pantries have served as an invaluable COVID-19 resource for survivors of domestic and intimate partner violence, Census outreach and on-site completion, and sexual health and wellness information.

The deadline for the Census has been constantly in flux. Despite a recent court ruling to revert the deadline to October 31, the U.S. Secretary of Commerce announced on Wednesday an earlier target date of Monday, October 5 to end the count. Just one hour later, the Trump Administration’s decision was blocked by a federal appeals court. Given the uncertainty and ever-shifting deadlines, it is imperative that our communities are counted in the Census immediately. “The Census is the only civic engagement opportunity for all New Yorkers to be heard and for Indo-Caribbeans to continue to build political power and respect from our government,” said Amin.

Complete the Census NOW by visiting my2020census.gov or call 888-330-2020. EVERYONE COUNTS, regardless of immigration status, age, or gender. It is illegal for any information taken from the Census to be used for any purposes beyond statistical. The form is 100% safe and your information will be protected. 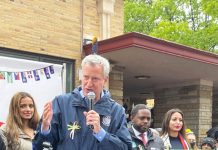 ‘I Have a Vision and Agenda for Equity and Justice’ – Felicia Singh, Candidate for City Council in District 32

IDB Outlines Priority Areas for Funding to Deal With COVID-19