Let me be very forthright: it was a low scoring game, void of anything spectacular. The over 300 fans watching the game from around the boundary simply went through the motion of “watching a cricket game”. The first two and a half hours were “very trying” for the spectators to bear. The final fifteen minutes gave them “some sort of a reprieve” from boredom.

It was a day when Mother Nature smiled on cricket lovers, giving us a glorious sun shine day, considering that for the few days preceding game day, we had our share of wet weather. Joe had done a great job preparing the field. The grass was well manicured and the wicket compressed hard prior to laying of the matting. The over 300 fans came early and set up their tables stacked with delicious foods and of course, the ever present cooler stocked with invigorating “cold beverages”. I will not say what the beverages were. Use your imagination.

The match umpires were decked in their usual black trousers, and, for the first time, ever seen, sporting a yellow official umpiring jersey; topped off with a white hat. For the first time, in over two decades, Umpire Steve Kalloo was not on duty. He was honored at the 27th Annual Game last year, and he decided to “take a rest”. Replacing him in the middle was Umpire Danny Khan, who shared the duty with another perennial, Umpire Ashook Brijcoomar of Canada.

The Caribbean Invitation IX won the coin toss and inserted the Guyana XI to take first knock. The opening batsmen, Randall Wilson and Amar Persaud found the speedsters Juanoy Drysdale and Al Small “too much to handle”. Wickets tumbled. Guyana 17 for 2. A third wicket partnership of 53 between Wasim Haslim (35) and Matt Marques (22) was the only resistance offered against the Caribbean bowling attack. Once they were separated the rest of the batsmen were bundled out within 30 over for 108 runs.

Spearheading the bowling were Juanoy Drysdale 3 for 16, Renwick Batson 3 for 17, Dino Chooweenam 2 for 19 and Andrew Davis 1 for 2.

Needing a meagre 109 for victory, Caribbean IX lost a wicket with no run on the board, but a second wicket partnership of 44 between Mark Gomes (11) and Dino Chooweenam (34), and a third wicket partnership of 42 between Dino Chooweenam and Gavin Wallace (36) stopped the rout. However, once the third wicket partnership was broken, the flood gates opened. Wickets fell as frequent as bowling pins. Caribbean IX slipped from 86 for 3 to 108 for 9: 6 wickets fell for 22 runs. This was the only juncture of the game at which the spectators had “some sort of excitement”. One wicket in hand, one run to win. A maiden over bowled. Would there be a Super Over! Nah, the first ball in the 16th over was touched for a single. The game was over. Caribbean IX was able to squeeze a victory.

The fans were then treated to a short cultural program featuring female dancer, Chandani Singh and local artistes Gopaul and Son Son who sang a Mohamed Rafi number.

Because the game had ended in a little less than three hours, Ralph Tamesh, the President of the ICF, after consultation with both Captains, players and umpires, decided to play a second game: a twelve over’s match to entertain the spectators. Rest of the World made 106, Guyana in reply made108. After a short presentation ceremony in which Ralph Tamesh thanked all for “making this day possible” everyone dined on some delicious ethnic food donated by Mr Hafeez Ali of Rockaway Roti Shop, Buddy Ramsarran of Palm Court Restaurant and the family members of Tamesh family. The best bowler prize went to Juanoy Drysdale 3 wickets for 16 runs, best batsman went to Gavin Wallace 36 and the MVP went to Dino Chooweenam who made 34 and took 2 wickets for 19 runs. The prizes were donated by Ravi Etwaroo of Cricket Zone USA and Lesly Lowe President of the Commonwealth League. 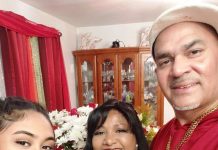 Judges Call on Prime Minister to Retract Statements on Appointment of...

Sat to Kamla: ‘You Will Pay a Hell of a Price’

VS Naipaul on Cheddi Jagan and Burnham

World Bank Experts to Help Guyana in the Development of its...