NEW YORK – A Caribbean born United States-based immigration attorney is lamenting the “terrific” situation for 800,000 undocumented, young Caribbean and other immigrants who are dependent on the deferred action for early childhood arrivals (DACA).

“While both the Republicans and the Democrats say that these individuals should receive some kind of immigration relief, the circumstances are just so complicated that it prevents these two parties from reaching any kind of deal that would result in the passage of a law,” Roland Ottley told the Caribbean Media Corporation (CMC), adding “that would give these young undocumented individuals the relief that they so desperately need”.

The DACA program was instituted by US President Barack Obama but has been rescinded by his successor, Donald J. Trump.

Several US district courts have, however, ruled Trump’s rescinding of the policy as unconstitutional. The issue is now before the Appellate Court.

Ottley, who is from St. Vincent and the Grenadines, noted that Trump “has been going back-and-forth and giving mixed signals about his intentions for the forward action,” regretting that “the president has never committed to providing relief to these undocumented individuals.”

“Had it not been for several lawsuits that were filed to prevent the complete recession of the deferred action programme, there would have been the commencement of mass deportation as of March 5, 2018,” said Ottley, referring to the deadline that Trump had given the US Congress to fix the issue or DACA recipients would be deported.

He said Trump has been using DACA as a “negotiating tool to pressure lawmakers to pay for the wall along the Mexican border.”

But Ottley said, while DACA is a high priority for Democrats and some Republicans, “it appears as though politics is the main hindrance to the passage of a law to provide relief to these undocumented individuals.

“It appears as though some Republicans do not want to pass a bill that would grant relief to those undocumented young individuals, because it would give even more momentum to Democrat,” he said.

“While many Americans are unable to determine why Congress is unable to pass a bill that would grant such relief, other Republicans may still be inclined not to grant such relief to individuals that are in the United States on an undocumented basis, regardless of their ages,” he added.

Ottley warned about the ominous disruption of families if DACA recipients are ultimately deported. – CMC 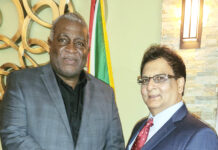 Queer Caribbeans of NYC Opens at the LGBT Center

The 2017 Diwali Motorcade Was the Biggest Ever!